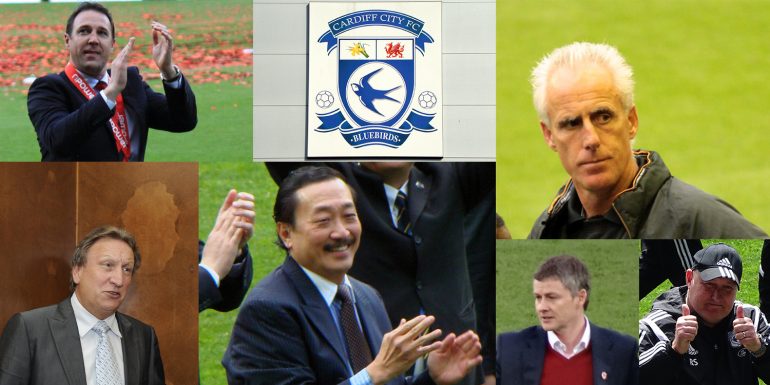 What impact have new Cardiff City managers had in the Vincent Tan era?

How does Bluebirds boss Mick McCarthy compare to other Tan appointees in their first two months in post?

MICK McCarthy has now been in charge of Cardiff City for two months, most recently masterminding a derby victory over Swansea City.

As we enter a two-week international break, it gives us a chance to reflect on his tenure so far.

“I wanted to get back on the tail-end of the play-offs, and with that result we’ve done it. It gives us momentum, and now we’re going into the break having not been beaten.”

McCarthy is the seventh permanent manager to take charge of Cardiff since Vincent Tan became the owner of the club in 2010.

You can watch this video to remind yourself of the events that led to McCarthy’s appointment:

But how does McCarthy’s impact in his first 14 games in charge compare with Tan’s other appointments?

When Mick McCarthy took over as manager of Cardiff City, they were 15th in the league having lost six games in a row, but since then the Bluebirds have shot up the table to 8th.

McCarthy’s Cardiff team have only lost one of his 14 games in charge, a 2-1 defeat at home against Watford.

He has won eight games in this time, giving him a win percentage of 57%, higher than any other Cardiff manager in the Tan era.

Malky Mackay came closest, winning seven games from his first 14, including three league cup games which would eventually take Cardiff to a cup final against Liverpool at Wembley.

Russell Slade’s team won 43% of their first 14 games, while Neil Warnock and Neil Harris both had win percentages of 36%.

Ole Gunnar Solskjaer won only 29%, although he began managing in the Premier League and not the Championship, unlike the other managers.

Mick McCarthy’s team also boast better statistics for goals scored in the first 14 games than any other Cardiff manager appointed by Tan.

The Bluebirds have scored 26 times for McCarthy, one more than Malky McKay’s team in the same number of games.

Ole Gunnar Solskjaer’s team has the worst record of the six coaches, managing only 15 goals in 14 games.

As well as having the most prolific attack, McCarthy has also solidified the defence since his arrival.

So how does McCarthy’s record compare historically?

McCarthy has had a positive impact in his first 14 games as manager, and his record compares favourably to other recent Bluebird bosses.

But how does it compare to all the other managers in the club’s long history?

Some managers have taken charge of Cardiff more than once, but for this article we have only looked at the impact of each manager in their first attempt at the job.

Match-by-match statistics are available as far back as 1933, and they show that in the first 14 games in charge, only three managers bettered McCarthy’s win percentage of 57%.

Billy McCandless and Alan Cork, who first took charge of Cardiff in 1946 and 2002 respectively, both had win percentages of 66%, while Lennie Lawrence had the best record when he became manager, winning 73% of his first 14 games.

In a ranking of the number of goals scored by a team in a manager’s first 14 games, McCarthy comes seventh out of the 31 managers who have taken charge of Cardiff since 1933.

And, defensively, no manager has seen his team concede less goals in their first 14 games than McCarthy’s nine.

What could happen next?

The Bluebirds are currently just four points away from the playoff positions, with eight league games to play.

Cardiff fans will be hoping that this positive start will translate into a Premier League promotion in the near future.

For more Cardiff related football content, check out these stories: