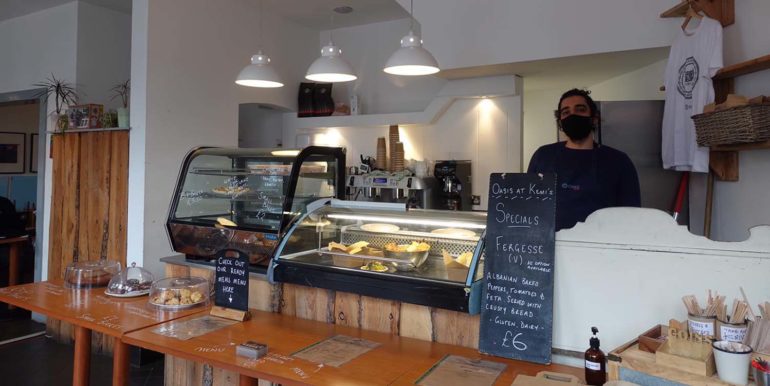 The Oasis Centre are taking over Kemi’s in Pontcanna every Tuesday and Wednesday starting from today.

The collaboration is taking place so that Oasis clients with refugee status can gain experience working in a café.

“This will help to train them and give them the skills they might need to get a job in hospitality and catering,” said Social Media and PR officer Sarah Morgan.

Owner of the family-run coffee shop Kemi Nevins is also a catering consultant at the Oasis Centre based in Splott, which offers support to refugees and asylum seekers in Cardiff.

Kemi’s coffee opened in its current Pontcanna location in 2012, and the Oasis team will work there alongside Kemi’s staff two days per week for the next six months.

Kitchen worker at Oasis Daniel Abrahim, 30, is starting work at Kemi’s today. He explained what he has worked on at the Oasis Centre so far.

“Normally The Plate Project provides food for asylum seekers and refugees three times a day, for breakfast, lunch and dinner and during Covid we had the delivery service. I’ve worked on this project since 2019, but the project started earlier,” he said.

Daniel wants to continue to work in hospitality and catering and hopes that working at Kemi’s will help him to develop skills in this area.

“I can learn how to serve the coffees and how to run a coffee shop or a restaurant. So every day I learn about something new which I didn’t have any experience in before,” he said.

Kemi’s café staff member Patrick Nevins, 29, said he was excited to work with the Oasis team.

“It’s nice to have Oasis over on this side of Cardiff. Really looking forward to it. We’ve spent the whole year doing different things all the time, so it’s another project to look forward to.”

The collaboration was organised before the recent hospitality restrictions were announced and originally the plan was to serve customers eating inside the café.

However, Kemi’s and Oasis decided that the collaboration would continue despite the restrictions and would transition back to eat-in once lockdown restrictions allow.

“We just thought we’d go for it,” said Mr Nevins.