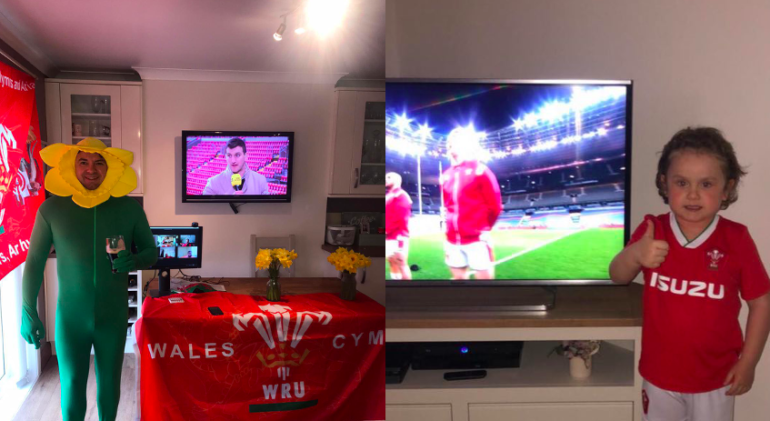 WELSH Six Nations hopes are hinged on Scottish success in Paris this Friday, after having their Grand Slam chances snatched away in the last minutes by France.

Wales fans may feel bereft but the good news is they could still be celebrating the title heading to Cardiff.

If Scotland win, draw or even lose but stop France scoring four tries, then Wales are champions. Currently, Wales have scored 20 tries and France have scored 15 tries.

Even if Scotland suffer a defeat and concede four tries, as long as the final margin of defeat is 19 points or fewer, then the Guinness Six Nations trophy will belong to Wales.

We spoke to some of Wales’ biggest fans who shared their hopes for the title race.

Alex Tabero, from Cardiff, believes that the trophy will not go to Les Bleus on Friday and expresses his support for the Scots.

“I will support Scotland anyway and at the start of the tournament, I thought they were one of the teams who could beat France. It’s a tough one to call, but I am gonna say 28-20 to Scotland as the final score. I wouldn’t put money on it though as all my predictions have been wrong!

“I also can’t see France beating Scotland by 21 points on Friday. So yes, we’ve done enough to secure the championship in my opinion. Unless France pulls out some magic, if they do, they deserve to be champions.”

Lee Llewellyn, from Neath, describes his optimism for Friday and the future for the team.

“I think France will win on Friday but not with the 21 points required and we will still come away with the title. It was a bit like Wales did to Scotland all those years ago in the last 10 mins but with not so much riding on it. It’s been a massive tournament for us with a lot of new exciting players coming through so I’m really excited about the future!”

Jonathan Lock, and his son Rocco, are two of Welsh rugby’s biggest followers but will be supporting their Celtic cousins on Friday evening.

“I think Scotland are capable of scoring a couple of tries on Friday. Even though I think France will win, I don’t think it’ll be enough. I think it’ll be about 10 or 15 points difference, so fingers crossed! Come on Scotland!”

Wales and France in numbers