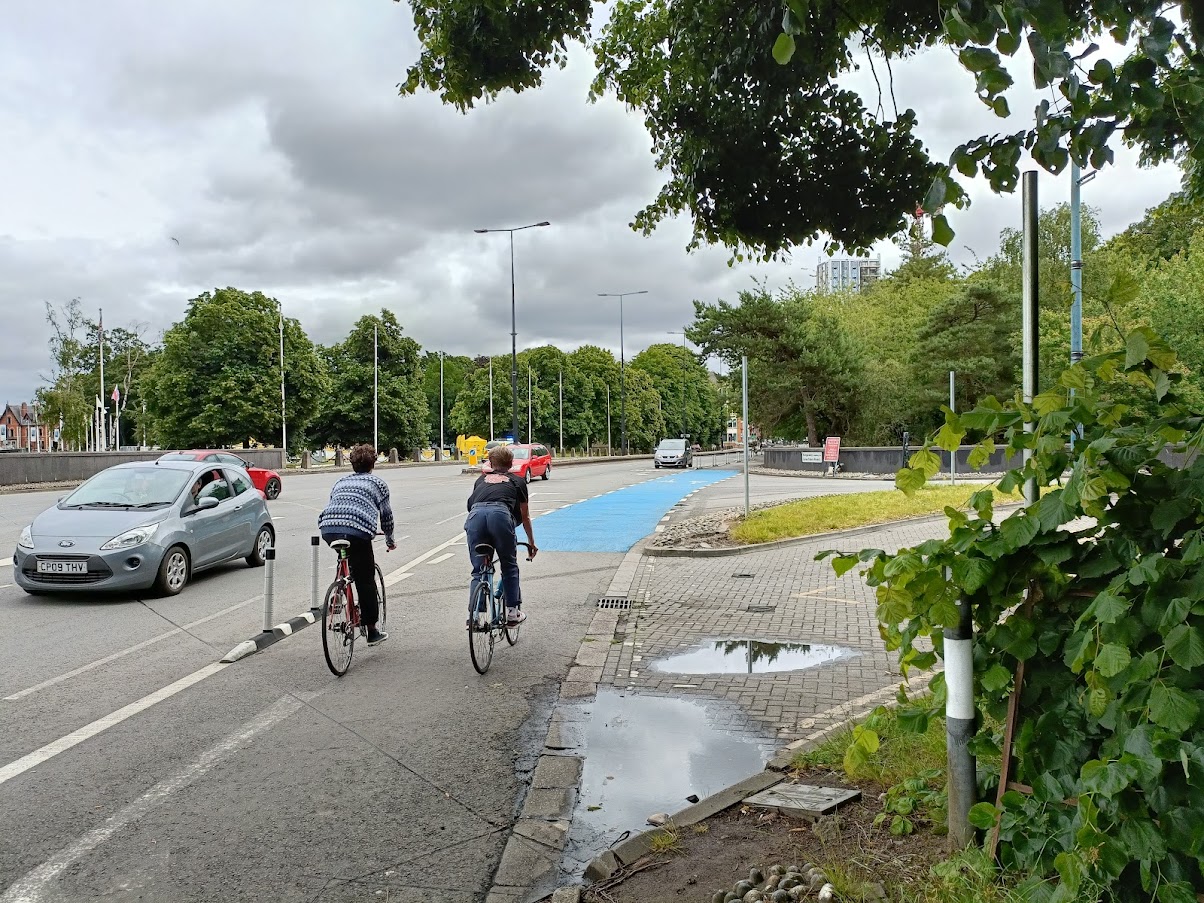 Spanning across the city centre from Canton to Adamsdown, what began as a pop-up cycle way during the pandemic has become a core part of cycling in Cardiff. With the final Newport Road stretch of the Cross City Route having now been open since January, I decided to ride along the route and to speak to cyclists about what they think of the cycle lane.

Will Henson, 30, lives at one end of the cycle lane in Canton. He said: “My main issue with the cycleway now is that they are yet to extend it into Canton beyond the end of Wellington Street. It still ends abruptly by Kitchener Primary School so it is useful for me but not for children, as it still means most people will have to cycle on busy roads for a bit if they are going from Canton into the city centre.”

He added: “They need to start work on the planned extension further into Canton as soon as possible.”

James Curran, 43, also lives in Canton and found the same problem. He cycles along the route with his family and said: “It’s great once you are on it. Getting to it safely with kids is a challenge though, what with all the traffic around the city.”

He thinks that low traffic neighbourhoods are the solution. He said: “Canton and Pontcanna would benefit so much from them. It would reduce traffic in the areas making it safer for cyclists and pedestrians to get about. It would make the areas much nicer places to live too.”

Paul Dowers, 55, uses the cycle route five days a week, cycling from St David’s Hospital to Queen Street. He said: “It feels much safer going that route now. Before it was a nightmare, I used to avoid it by cutting through Sophia Gardens and Bute Park.”

He added: “It makes you feel a lot safer riding through town being separate from the traffic. There are some issues though. Most people whilst crossing the road only look one way and just step out, especially whilst crossing near Canton Bridge. I’ve had to brake loads of times near there due to people not looking and just walking out”

Riding the route myself, I found exactly the same problem, having to brake just after the bridge for a family cutting across the cycle lane.

Lloyd Bingham, 33, who uses the route two to three times a week, also finds that pedestrians stepping into cycle lanes is an issue but is most worried about drivers. He said: “Most people are aware that they are there now but you still get drivers not looking or giving way when they need to. I am not aware of any accidents this has caused myself but I have had a few near misses and I think cyclists know they need to be aware at junctions for unaware drivers.”

He added: “On the whole though, they are a huge improvement. They make the journey quicker and safer and, as they become more established, hopefully more people will choose to use them. They do get used a lot at the moment though, despite some drivers saying they don’t.”

Councillor Dan De’Ath, Cardiff Council’s Cabinet Member for Strategic Planning and Transport, said: “The new cycleway has been broadly welcomed by the cycling community, as the absence of an east to west connection and the lack of a segregated cycle lane along Castle Street was a large gap in the city’s cycle network.

“This route now provides the foundation for the further expansion of Cardiff’s cycle network. Plans in development include proposals for a segregated cycleway east of the city centre along the Newport Road corridor and to the west through Canton area towards Caerau and Ely via Leckwith Road and Lawrenny Avenue. A segregated route through Roath Park towards north east Cardiff is also being proposed and both off these new routes will be published for consultation later this year.”

The charity’s Ryalnd Jones said: “Sustrans Cymru fully supports Cardiff Council with their ambitions to develop a framework of dedicated strategic cycleways, aimed at providing dedicated space for cycling through key transport corridors in and out of the city. We continue to work closely with the Council in providing feedback and guidance on the development of a number of schemes with a view to ensuring that the cycleways link up and connect communities, schools and businesses in a way that makes it easier for everyone to choose to walk or cycle for everyday journeys.

“We know that reallocating road space for cyclists and separating them from motor traffic is a key element in encouraging more people to cycle and feel safe whilst doing so. These lanes on key transport corridors are a vital component of the developing network in Cardiff. We know it is a work in progress and ensuring the network provides continuous routes, particularly with continuity across junctions, is vital to maximise the benefit of these features.”

Some at the charity felt that there were things that could be improved about the route, raising the issue that long waits at bicycle traffic lights was leading to some cyclists ignoring them, but were positive about the easy journey it provides and the range of people using it.

Joe Rossiter, Sustrans’ policy & external affairs manager, added: “It’s great to see the continued development of the Cardiff cycle super highway. These connected routes play an important role in linking communities across the city together and people to the services they need to live happy, healthy lives.

“We know that the cycle super highway isn’t perfect but it’s an important step in the right direction. If we are going to get people out of their cars and onto their cycles, then cycling routes must be safe, accessible and connect people to the things they need. The super highway will help to make Cardiff a greener, healthier and more connected place.”