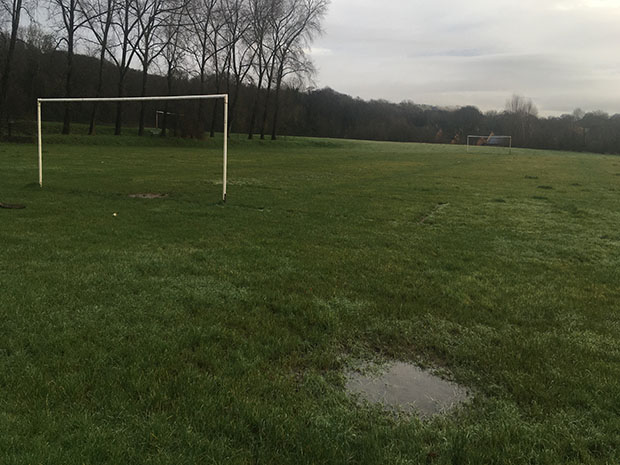 They are letting the community down, says president after continued delays

A DISPUTE between Cardiff Council and Persimmon Homes has meant no progress has been made to fix Thornhill’s football pitches – for the 25th year.

Thornhill Athletic FC started experiencing severe flooding on their pitches only two years after moving into their home playing fields on Glenmount Way in 1993.

So this makes this the 25th year that the club, which runs 20 teams of girls and boys aged six to 16, has been unable to play a full season on their home ground.

The council hired a sports turf specialist in September 2016 to examine the grounds and it was recommended that a new drainage system should be installed in all areas of the field.

Every year, when the weather gets bad, the club must find other facilities to play in the league because the drainage system cannot cope with heavy rainfall.

This has meant the club must pay more money to use other facilities.

For some games, the club has to pay a £166 fee to use Llanishen High School’s astroturf, whereas it would usually only cost £44 to use their own home ground.

The council initially set aside £65,000 to fix the pitch.

However, Thornhill Athletic FC president, Dennis Moss, said this amount was a “drop in the ocean when you compare it to the amount that we’ll actually need to fix the problem”.

After the land was surveyed, it was estimated it would cost a total of £220,000 to fix the drainage system – but  it is thought this amount has since increased.

It was only once the council had made its decision to start work on one of the pitches that it realised the land was still owned by property developer Persimmon Homes.

Work has since been stalled as the council and Persimmon Homes dispute responsibility over fixing the pitch.

A spokesman for Persimmon Homes East Wales said: “We installed this football pitch 25 years ago as part of a new development in the area.

“The pitch has been extensively used over the 25 years. We are aware it does suffer during periods of heavy rain, as do many other pitches and grass play areas.

“We are working with Cardiff Council and investigating possible solutions.”

Conservative Councillor for Llanishen and Thornhill, Thomas Parkhill, said the pitch should have been adopted by the council years ago.

Now these problems have arisen the council and Persimmon Homes are in tough negotiations which are slowing down any real progress.

“The council want at least some of the costs of fixing the pitch to be paid for by the developers before adopting,” he said.

A spokesperson for Cardiff Council said: “Any investment has to represent value for money and result in increased participation in sport, which is why our priorities include investment in 3G pitches and sports facilities on school sites where they can also be utilised by multiple community sports teams.

“We have spoken to a number of organisations with regard to assistance with funding the considerable work that needs doing to resolve the drainage issues with the pitch in question, however they have been unable to justify such extensive funding for one pitch and one team.”

Mr Moss now fears that any money that was once set aside by the council has been lost in the system and is disappointed by the lack of action by the council.

“They say they’ve got other priorities – it’s been over 25 years, how is this not a priority? They’re letting the community down.

“I’ve thought about starting a petition, and I know we’ll get signatures because people are fed up of not seeing our facilities being used, ” he said.

Coun Parkhill said that he would “absolutely back a petition.”

“This is a priority for the people of Thornhill. The football club has suffered from this and it has had a real impact on the community,” he said.