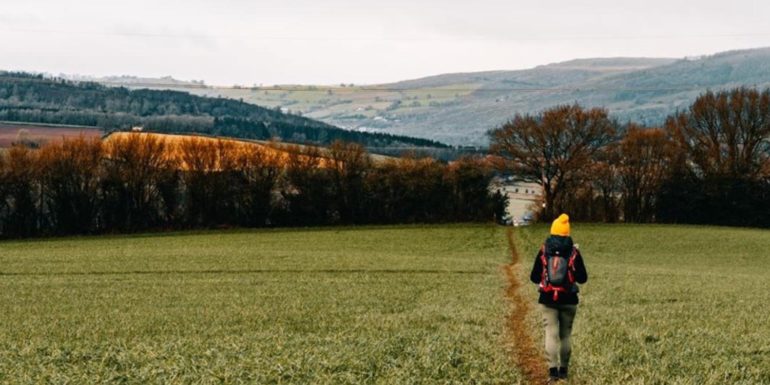 MANY of us have found ourselves walking a lot more recently as it is one of the few things we can do during lockdown.

Keen walker Carys Rees has created a website, This Girl Walks, to live-track her various hiking and walking routes to encourage her friends, family and followers to walk more.

“I find it crazy that people want to follow me, I’m a nearly 40-year-old woman who just wanders around”, said Carys.

The website acts as a guide and users are able to follow in Carys’ exact footsteps, making hiking accessible to those that are not confident in map reading.

Carys prefers to walk alone rather than with someone else.

“Not that I don’t love being with friends, I just also love being on my own. I’m perfectly happy with my own company,” she said.

Carys is determined to empower women to go out walking, hiking or even wild swimming to reap the benefits of spending time alone in nature.

“A few women have messaged me and said because of you I had the confidence to go out and do the walk. It makes me quite emotional. I’m not typically an emotional person and I don’t generally cry, but some of the messages do get me.”

“As women we are told never to go anywhere alone. But too many people are waiting on others to go, you’ll wait forever. You’ll waste your life if you’re always waiting for someone else.”

Lockdown has forced many of us to spend more time with ourselves, Carys stresses that there is a difference between solitude and loneliness.

The benefits of being alone include prioritising your own interests and self-development, a boost in productivity and an increase in empathy for others.

Carys applies this mantra to other aspects of her life, such as going to the cinema or a restaurant, and isn’t phased by spending time alone.

Exercise is often linked with benefitting your mental health. For Carys, going for a hike is a form of stress-relief.

“The endorphins, the fresh air, I sleep better, I feel better and you just feel healthier for it. It doesn’t feel like a chore to me,” said Carys.

“I’ve always been a hiker and a walker, I’m from Carmarthenshire originally so I’ve grown up with it.”

Growing up in Ammanford, Carys and her family were often out in the countryside together. It is her father that passed on the walking-bug to her.

“My dad is in his seventies and he still walks with me, he’s faster than I am. He’ll be 73 in March and he just flies down the mountains.”

Her love of hiking has “massively” kept Carys going during lockdown. Living in Birchgrove, she has Garth Mountain, the Castell Coch trail and Fforest Fawr on her doorstep.

Her advice for beginners is to “build your mileage up, walk around places like Roath or Bute Park that are populated. Build your legs up, you’ll be surprised as to how far you go. A couple of miles isn’t as far as you think.”

When restrictions are lifted Carys is eager to get back to one of her favourite places in the world, the Brecon Beacons.

“I love the Brecon Beacons, there’s so much to it that people aren’t aware of. You very rarely see other people, some days I go out and I don’t see a single person, which doesn’t bother me.”

In future she hopes to climb the infamous Machu Picchu in Peru.