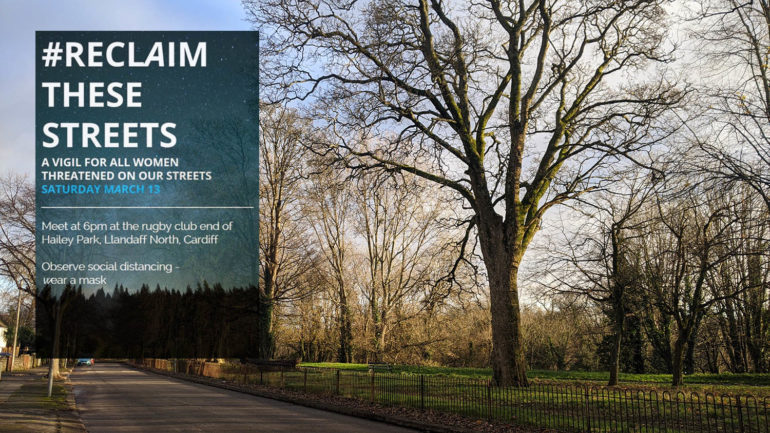 Reclaim These Streets vigil to be held in Llandaff North

A VIGIL in Llandaff North is one of dozens organised across the UK in the wake of the death of London woman Sarah Everard.

The demonstration will take place at 6pm this Saturday in Hailey Park, near the Llandaff North Rugby Club, and aims to highlight the everyday dangers faced by women, and the need for safety.

The organisers, who do not want to be named, said: “We were saddened and shocked by the news of Sarah Everard’s disappearance, and when people said ‘she shouldn’t have walked alone at night’ we started to get angry.

“She was just walking home, it was 9pm. It was not her fault. We started sharing our own experiences of harassment – we all have them, and many of us have stories of sexual assault, too.

“We started to articulate for the first time the fear we feel at night, walking with keys in hand and fearing the footsteps behind us.

“Hailey Park and the Taff Trail are out of bounds to most women alone at night, and even running there during the day some of us have experienced harassment. It’s time to take a stand.”

“Sarah Everard mattered. Sarah’s family and friends have spoken of the light she brought to their lives and they have experienced a huge loss.

“What happened to Sarah is resonating with women across the country because it so easily could have been any one of us.

“I stand in solidarity with women, trans women, non-binary people and all survivors of gender-based violence.”

Sarah Everard, a 33-year-old marketing executive, went missing on March 3 on her way home from a friend’s house. She was last seen at 9.30pm that night, walking alone near Clapham Common.

This afternoon police confirmed that a body found in Kent on Wednesday evening was that of Ms Everard.

Wayne Couzens, 48, a Met police officer, has been arrested on suspicion of murder in relation to the case. He also faces a separate allegation of indecent exposure.

News of the case prompted an outpouring of grief and outrage from women across the UK, who shared their experiences of street harassment on social media.

On Wednesday a group calling itself Reclaim These Streets announced on Twitter that a vigil to highlight the dangers faced by women would take place in Clapham Common, near where Ms Everard disappeared, on Saturday March 13, at 6pm.

Demonstrations were then organised in cities and towns across the country. As well as the vigil in Llandaff North, there will also be one outside the Senedd in Cardiff Bay at the same time.

A list of resources for victims of sexual abuse can be found on Mind here.

For more on this topic, read our piece about the Cardiff students taking a stand against street harassment here.