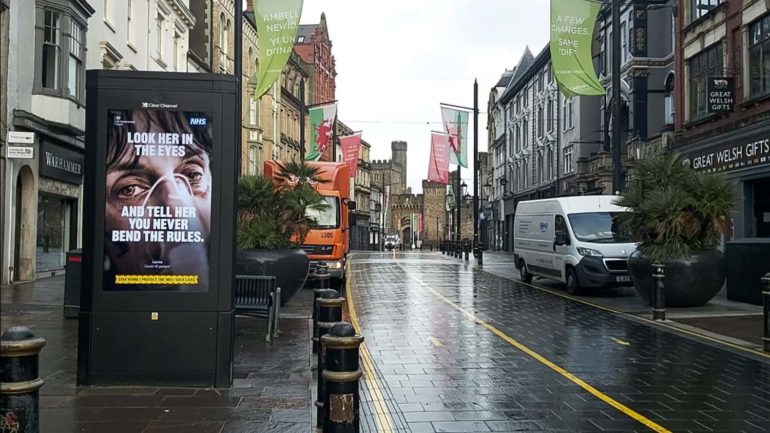 Survey shows when people were most worried about Covid

FOR people in Wales, the risk of Covid-19 felt highest in March due to the unknown nature of the virus – according to a Welsh government survey.

The survey asking people for their views on the pandemic will have been collecting data for a year next week.

It shows that a high of 65% of people thought someone close to them was likely to become infected during the first wave in March. The first wave was also when the highest number of people believed there was a threat to them personally.

“The last pandemic that happened was around 100 years ago, so I had not seen something like this and it was quite scary to be honest,” said Cardiff businessman Bashir Darma, 39.

“When it started, because it was something new and it was unexpected we didn’t know about it. Now, because there are jabs and medicines coming out there is hope.”

Nursing staff also cited the second week of March 2020, when they were treating Covid patients, as when they felt the most personal risk and the greatest risk to their loved ones.

“Not a lot was known about it then, so all of us stopped seeing our families,” said a nurse who asked to remain anonymous.

“I’d have antibacterial spray by my front door. I live with four other girls, so I would come in after a shift, spray the door handles, walk straight into the kitchen not touching anything – if I touched anything I’d spray it with antibacterial spray – take all my clothes off in the kitchen, put them in the washing machine, have a spare set to put on, go upstairs, shower, put the clothes that I just used to walk upstairs in the wash and then clean the shower.

But the medics said the biggest threat to the population at large came later in 2020.

“The beginning of the second wave, so October, November when there were the worst numbers, was the worst point because we ran out of beds in ITU and we were at capacity. Our nursing ratio was supposed to be one to three but actually it was one to eight,” said the nurse.

“We also got to the point where we were like, when is it going to stop? Are we going to have more next shift? And the next shift?”

However, the government survey shows that for many people the financial risk posed by the restrictions may have been seen as the larger issue.

Throughout the pandemic roughly a quarter of people worried that they wouldn’t be able to pay next month’s bills.

Two Cardiff residents spoke about how they struggled financially.

“I’m currently on furlough, my mum’s on furlough and my stepdad is working from home. He’s actually now part time working from home, so it’s been a bit of a struggle. My furlough has majorly cut down the amount of money I’ve got – I can pay rent and my bills and that’s just about it.” said hospitality worker Gemma Carrieri, 22.

Student Jessica McGhie, 20, said: “I’m agency staff so I can’t get any money from the government and I can’t work at all. I get an allowance from my uncle, so he’s had to step that up to help my living costs because I’m an international student, so I don’t get any student loans.”

Although the survey shows a decrease between March and October in people who think Covid-19 will financially impact them, the data was discontinued before December.

Mr Darma explained that the lockdown that took place at this time was what impacted him and his business the most.

“Before Christmas was the worst point. That was supposed to be the best time for us, for retailers, and it hit our business really badly to be honest.”

The survey shows a large amount of support for both the Welsh Government and the NHS throughout the pandemic.

Ms Carrieri contrasted the Welsh Government’s actions with those of the UK Government.

She said: “I would say the Welsh Government have probably done a bit of a better job than the English, I wouldn’t say it’s that much better. I think our firebreak wasn’t long enough and it was a pointless two weeks and they should have just done a month like England did.

“I guess they should match up the dates here with what England are doing otherwise we get people coming over the border.”

Despite the high levels of support shown in the survey results, people we spoke to felt that in hindsight there were a lot of things to criticise the Welsh Government for.

Ms McGhie, who originates from New Zealand, said: “They’ve got better at what they have put in place but they have just been so late with everything.

“What New Zealand did was they said ‘we’ll get through this together, we all just need to band together’ whereas what the UK did is say ‘oh, we’ll get over this.”

Hospitality worker Ms Carrieri added that she believed the Eat Out to Help Out scheme was not helpful in stopping the virus spread.

“I worked during eat out to help out, and that was a bit of a mess for us. People weren’t understanding that it was still around. We weren’t even told to wear masks at that point, most companies said that you don’t have to,” she said.