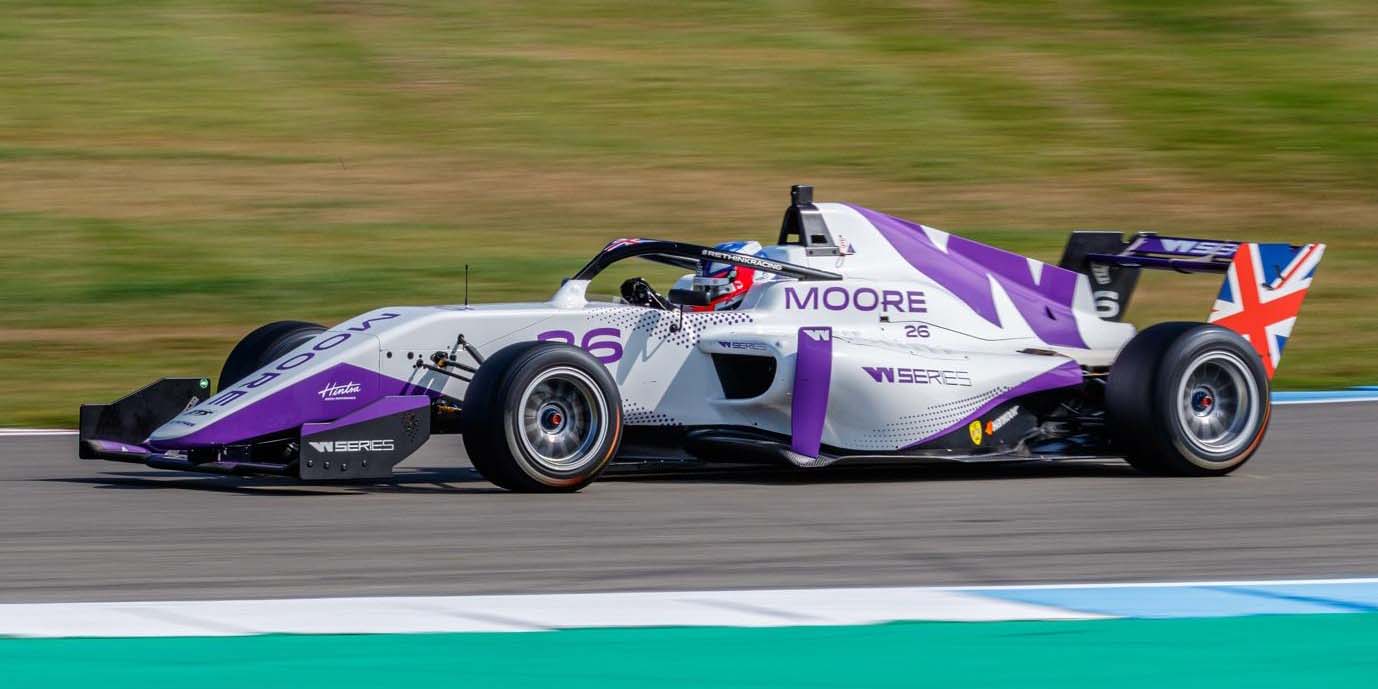 Further chats to the pro British driver about her career, lockdown achievements and the work she does to promote LGBTQ+ representation in motorsport

Secretly listening to Teenage Dirtbag, Sarah Moore is gearing up to compete in the third season of W Series. This year the series will visit five new venues, including the first ever round in Asia.

With an outstanding track-record, Moore was the first female to win a Junior Mixed Gender National-Level series in the UK and to have won the Britcar Endurance Championship. However, her determination doesn’t stop there. Finishing 5th last season, the Yorkshire pro is now determined to place in the top three.

Listen to the second episode of On Track here:

Getting into the driver’s seat

Born in Harrogate, Moore began racing when she was eight years old due to the influence of her family. They had an air-circuit at the back of their house, but she hasn’t always enjoyed it.

She tells Further, “I have always enjoyed motorsport, but when I was younger, I was never any good at go-karting, I just did it because my elder brother did it and I got all his hand-me-downs. We all went away for a weekend and that’s how it was.

“I never won anything, but I also never finished last. I only started to enjoy it when I started winning races,” she laughs.

After the pandemic hit, Moore was forced to stop driving. Despite this, she found a way to turn her skill of driving into helping others.

In 2020, the racer got a job at a supermarket delivering people’s food shopping. She claimed that once the realisation hit that lockdown was going to last longer than a couple of weeks, she couldn’t just sit around at home.

“It was nice to see some people’s faces because they didn’t get out of the house and saw nobody throughout the day. Seeing you was the only thing they had to look forward to.”

Moore admitted that she “really enjoyed” the job and only gave it up in November last year.

During her time as a delivery driver, she witnessed many strange orders. One of which was made up of a bottle of vodka and a single packet of cigarettes.

While Moore helped people during lockdown, she also promotes representation for the LGBTQ+ society in motorsport. The pro driver became an ambassador for Racing Pride, which started by recruiting a small group of people in the UK who attended big shows such as Autosport International and Motorsport Days Live. Due to their success and popularity, they have been able to expand their programme to North America.

Moore praises the programme and claims their success comes from simply spreading the word. If this continues, the industry could make excellent progress.

“I just think it’s a case of word-of-mouth. We should always remind people that we’re around and willing to talk and support,” she says. “We’re not racing during pride month this year which I’m a bit gutted about, but I’m trying to create a pride special [helmet] which I’m planning to wear at Silverstone this year.”

Racing is an extremely male-dominated sport but W Series is changing this. The last woman in F1 was Susie Wolff who was the first on the grid in 22 years.

According to Sarah, the sport still has a “fair way to go,” but W Series is doing “fantastic” work to help promote women. As well as promoting female drivers, W Series is also helping to acknowledge the work women do as mechanics and engineers.

Moore said, “I’m guessing it will be years before we see another woman on the grid, I just hope that it’s in my lifetime.”