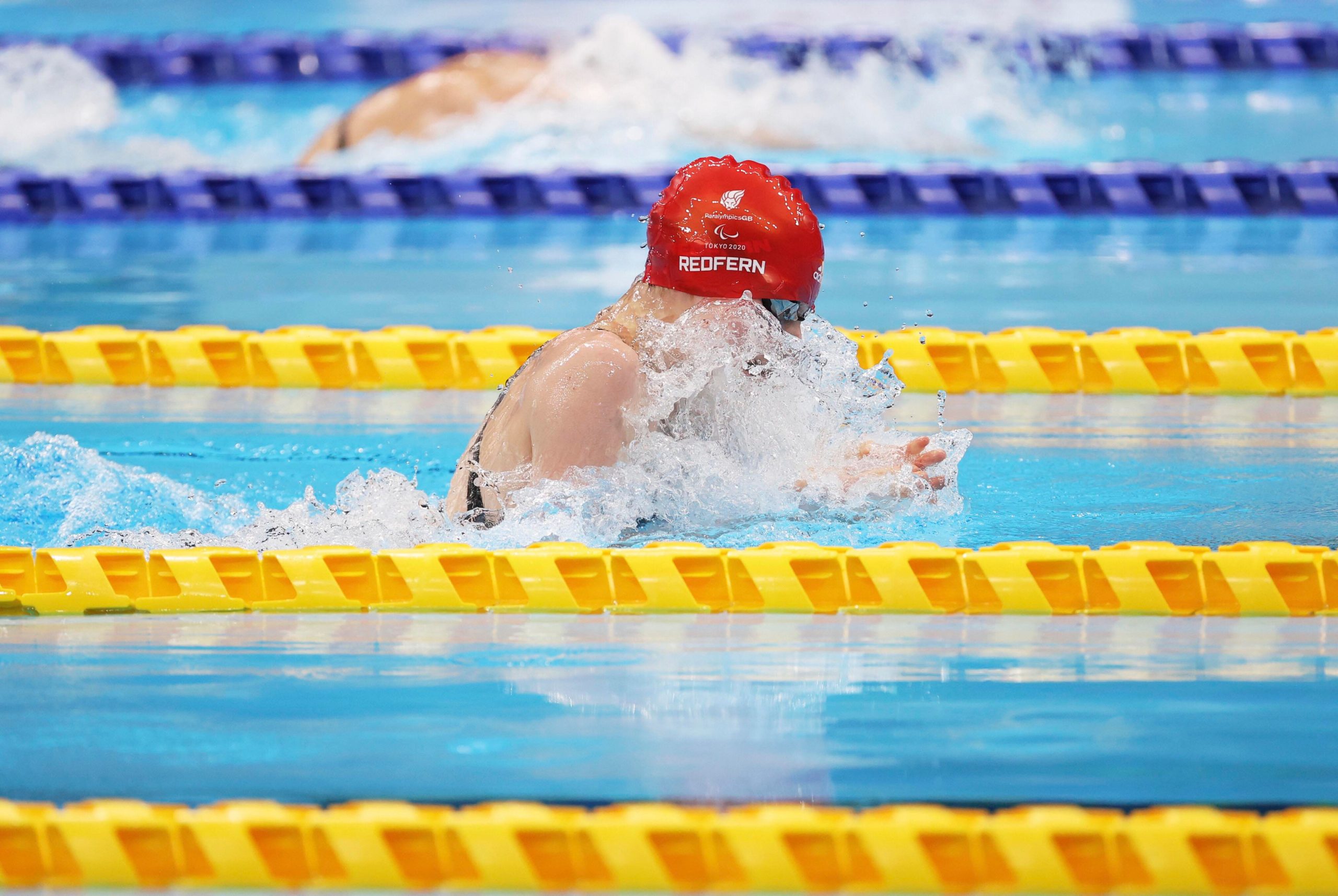 It’s a tale of celebration both in and out of the pool for swimmer, Paralympic silver medallist, and mother Becky Redfern

As we’re sitting down for a chat with Becky Redfern, we’re wondering if she has been on some well-earned downtime after her heroics in the Tokyo Paralympics last year.

Instead, she has just returned from the Para-Swimming World Series event in Aberdeen, qualifying for the Commonwealth Games in Birmingham later this year in the S13 50m freestyle. Redfern says, “So it’s looking like it might be a very busy 2022.” It sounds like it’s a case of ‘just keep swimming’ for this 22-year-old.

She’s already won two silver medals in the S13 100m breaststroke at both the Rio and Tokyo Paralympic Games and is a former world record holder in the event.

I remember being a small, nervous 16-year-old at the biggest competition of my life, yet being disappointed that I only came out with a silver medal

Redfern suffers from a degenerative eye condition known as retinitis pigmentosa, leaving her without peripheral vision. Therefore, she sits in the least severe visual impairment categories for the Paralympic and Commonwealth Games (S13).

She hails from Droitwich Spa and is looking forward to the major tournament much closer to home this year. “I’m really excited to have the Commonwealths so close in Birmingham so that my whole family can be there to support, rather than me being on the other side of the world,” she says.

Family has taken on an extra meaning for Redfern in the last two years, as she gave birth to baby Patrick. This was just over a year before winning her second Paralympic silver in Tokyo in August 2021. Patrick’s second birthday will almost coincide with his mum’s competition in the Commonwealth Games this year in July.

Becoming a big fish in a huge pond

For Redfern, her journey began when she travelled all the way to the Rio Paralympic Games as a 16-year-old still completing her GCSEs.

Under the coaching of Mark Stowe at Worcester Swimming Club, the same coach she has to this day, she underwent a mercurial rise. On her way to the final in Rio, Redfern broke the S13 world record in 100m breaststroke several times. But, in the final, glory wasn’t to be hers as Fotimakhon Amilova of Uzbekistan beat her to gold, despite the Brit qualifying fastest.

“I remember being a small, nervous 16-year-old at the biggest competition of my life, yet being disappointed that I only came out with a silver medal.”

Mentally, she was a lot harder on herself back then, under the kind of pressures few 16-year-olds are. “I used to obsess if I had a bad session; it would affect me throughout the day if it wasn’t great,” Redfern reflects.

She recalls how her dad, Steve, and eldest brother, Anthony, flew out to support her in Rio, recognising the huge importance of their roles in getting her to that moment. And then, as Redfern won gold in the Para-Swimming World Championships in London 2019, she learnt that her family would grow by one after she found out that she was pregnant.

A mum thrown in at the deep end

On 27 March this year, it will be Mother’s Day. For many, they can expect breakfast in bed with an assortment of chocolates and flowers, but for Redfern, it’ll be back in the pool, still swimming.

“So much has happened since I found out I was pregnant. These past few years have gone by so quickly, it’s hard to believe that Patrick will soon be turning two,” the Paralympian tells us.

The University of Worcester graduate is excited for her son’s birthday, even if it’s so close to the Commonwealth Games, “The competition doesn’t clash, so I can make sure to celebrate his birthday before I go.”

“I’m sure there will be a bouncy castle somewhere,” she remarks cheerily, sure to have both her parents and her three brothers in attendance.

However, she admits that being both a professional athlete and a mother is less than simple. “It’s been incredibly difficult, balancing it all,” Redfern says, “I think one of the biggest struggles has been on the recovery side. I rarely get downtime, and sleep is almost non-existent sometimes.”

She adds that her son has never been a brilliant sleeper and still wakes up two or three times a night. This makes recovering after a tough training session more challenging than it used to be.

Taking the plunge in Tokyo

Redfern reveals having her son has given her a fresh perspective on swimming and the negative pressures she used to put on herself. “A bad session isn’t the end of the world; Patrick still needs his happy mum at the end of the day,” she says.

This perspective showed when it was time for the Tokyo Paralympic Games, held in 2021, a year later than scheduled due to the Covid-19 pandemic.

This turned out to be a real blessing in disguise for the swimmer. “Had it not been for the pandemic and the Games being delayed, I wouldn’t have gone,” she says. After all, she gave birth to Patrick in July 2020, only a month before the original start date for the Paralympics.

Instead, the postponement gave Redfern nine months to recover, train, and qualify for Tokyo after giving birth. She admits that her team had their doubts, but she wasn’t going to let the opportunity go amiss.

“At the time, swimming pools were still shut, so we hired a seven-foot hot tub for the garden, which I trained in everyday through January and February, which was freezing,” she says convincingly.

Against all odds, she qualified for the Paralympics. But she still couldn’t help but miss her newborn. She says, “If it wasn’t for my teammates cheering me up, I don’t think I would’ve performed as I did. I missed home, I missed my baby, it was a very long three weeks away.”

This encouragement kept her going, with her qualifying for the final. Then, in August 2021, only 13 months after giving birth, Redfern equalled her previous achievement in Rio by winning the silver medal. She also set a world record for the 50m S13 breaststroke in the first 50 metres of her race.

“I just cried,” Redfern tells us, “I’m so proud of myself and everything that I put my body through in the last three years; it blew my mind.”

Now, looking ahead to the Commonwealth Games (and Mother’s Day) this year, Redfern has a simple goal. “To try to keep making my little boy proud of his mum,” she says.